21 July 2014 — Fabian finds himself in unexpected attire as he bids adieu to Curmudgeon Castle, and sets his face toward future adventures. 1377 words. 5 minutes.

The sun was just peeking over the eastern hills, throwing the shadows of the hedge mazes long against the castle wall. Fabian wished they could have started out later, as the cool morning air was unpleasant on his bare legs, but Basil insisted on an early start. 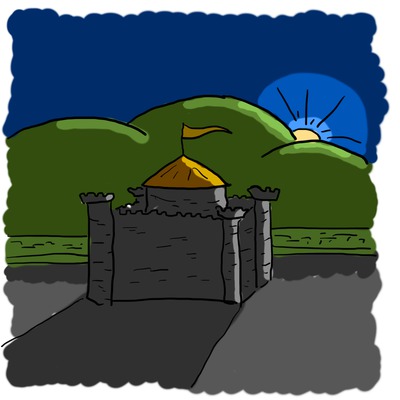 The sun was peeking over the hills

Behind and above them, from the castle battlements, a lone bagpipe played Auld Lang Syne. Fabian turned to wave at his brother. Anathema was busy inside, already hard at work on her proposed art gallery. He still found it hard to think of her as his sister-in-law.

“One moment, sir,” Fabian called to Basil. He set down his pack and the squeegee and adjusted his kilt—a parting gift from Fergus that he would just as soon have done without. He certainly didn’t share his brother’s obsession with all things Scottish—though the bagpipes were pleasant enough—but he didn’t dare offend at this point. Things were still too fragile between them.

Basil turned and blew out his mustaches. “Already, Fabian?” he said. “I dare say this will prove a long trip if you’re stopping every five minutes to tweak your kilt.”

“I’m sorry sir,” Fabian said, again hefting his pack. “As soon as we’re behind those hills I fully intend to change back into proper trousers.” In his free hand he picked up Spencer—the squeegee that Jasper had given him, a parting gift. Fabian had tried to name it Jasper, in fact, as a token of gratitude, but Jasper had objected.

“No need to ruin a perfectly good squeegee with a worn out old name,” he’d said.

So, Fabian had selected Spencer instead. Basil insisted that wizards didn’t name their wands, but Fabian was determined. He liked the name. It reminded him of a pet hedgehog he’d had as a boy.

As they entered the inner maze, Basil turned to Fabian. “I’m still amazed you managed to summon Nigel without coaching. Just from watching me do it once! You have potential, my boy.” He gestured to the hedges around them. “Perhaps you should do the honors?”

Fabian shrugged uncomfortably. “If it’s all the same to you, sir, I think I’d rather you did it. I already owe him at least two sandwiches.”

Basil choked. “Sandwiches? My boy…you didn’t let him name his price, did you?”

The older wizard tsked sadly. “Oh, dear. It’s too bad I wasn’t able to prepare you better for the negotiations. You need to have a strong hand with familiars like him—give him an inch, and he’ll take you for all you’ve got. We’ll need to renegotiate that contract.”

“You can do that?” Fabian blinked. “But, I signed it and everything…”

Basil made a deprecating gesture. “Pff. Yes, yes. Anything can be renegotiated, as long as both parties agree to it. The trick is to make Nigel want to renegotiate.”

“How do we do that? He got just want he wanted.”

Basil smiled slyly behind his mustaches. “So you give him more than he bargained for. He asked for a sandwich? Fine, make him exactly what he ordered, down to the least detail. And then add a little something extra. Something he didn’t expressly forbid, but which he certainly won’t like.”

Basil nodded. “So he eats the sandwich, hates it, and realizes that every time you call he’s going to get just exactly that…and bam. Suddenly, he’ll be asking you for a new contract.”

Fabian shook his head wryly. “I really do have a lot to learn, yet.”

“Not to worry, Fabian. Not to worry.” Basil smiled and took out his pencil. “Here, let me summon Nigel to get us through this maze.”

With a flick of his wrist, Basil called Nigel, who arrived with his usual pomp and volume. Within minutes they were being guided through the maze, and within the hour they were delivered to the far side of the hedges. Nigel gave them an ironic bow, and disappeared.

The sun had risen properly by then, and the day was warming up. As Fabian closed the large wrought-iron gate behind them, Basil admired the tall hedges one last time. “Fergus was just telling me last night that they’ll be sending out invitations soon.”

Fabian dusted his hands and nodded. “Yes, sir. I…I hope that works out. I feel very responsible for all of this.”

“I hope so.” Fabian pursed his lips. “They have high hopes for the carnival idea, too. So much rides on this! Without Monsanto, they really have no other options.”

They began walking away from the gate. The road immediately sloped upward, into the shade of the hills. The air grew chillier, and Fabian again wished he could have worn pants.

After a few minutes, Basil shook his head sadly. “Monsanto. That was a bad business.”

Fabian nodded. “Yes, sir. He was always kind of different, but I never would have guessed he was tinkering with alchemy, of all things.”

“Oh, alchemy’s not so bad,” Basil said, and Fabian stared in surprise. “Really,” Basil said defensively. “It’s just another way to understand the world. It’s too bad that Monsanto felt driven to hide what he’d been doing. Don’t get me wrong!” Basil said quickly. “I’m not saying he was justified in any of the things he did there at the end, but it’s just a bad business, all around.”

Fabian shook his head uncertainly. “I don’t know,” he said. “I still think it’s unfair that you made me restore him to himself. He made a good newt.”

Basil laughed. “Oh, I won’t argue that! But a lot of people would make great newts, and if we went around magicking them all into amphibians, we’d only wind up with a different set of problems. Anyway, it was certainly generous of your brother and his wife to let him keep so much of his equipment.”

“More than he deserved, for sure. They said he’d earned it for the help he gave them these last few years. But you know they found Fergus' best thesaurus in that secret lab of his? And Fergus was all set to blame me for losing it.”

“Now, now,” Basil chided. “Kindness costs little, yet yields much. Monsanto has good intentions, doesn’t he? I heard him talking about using his techniques to provide food to drought- and famine-stricken areas.”

Fabian snorted. “Sure. And all from the goodness of his shrivelled, blackened heart.”

Basil was quiet a moment, thinking. “Time will tell,” he said.

They walked in silence for a few minutes, climbing higher up the side of the hill. Behind them, Curmudgeon Castle grew smaller and more distant.

“I wish,” Fabian said, “that we knew why Anathema’s father was so bitter towards my family.”

Basil shook his head. “We may never know,” he said. “And besides…what good would it do you now? You certainly can’t change it.”

Fabian thought a moment. “No, sir,” he said. “I couldn’t change it. But…maybe I could change myself.” He laughed embarrassedly. “I don’t know if that makes any sense.”

Eventually, they crested the hill and paused to rest. Fabian set his pack down and stretched sore muscles as they looked back over Curmudgeon Valley. It was lovely, he realized. He’d never considered it that way before. He had missed this place.

But it wasn’t his home anymore. The thought made him sad, but there was no debating it. Still… Picking up his pack again, he grinned as he thought of all he had to look forward to. By evening, they’d be back at Basil’s humble house on the hill, and Basil would no doubt expect Fabian to resume his previous domestic duties as well as fulfill his role as apprentice. It would be hard, but he found himself excited by the prospect.

He turned to Basil as they resumed walking. “Sir?” he asked. “Are there any more algorithms you could teach me?” 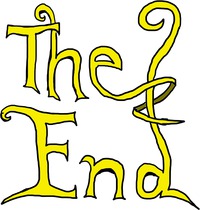 ← Chapter 8: “That’s Cows for You”
comments powered by Disqus

Basil & Fabian - A Wizard & His Man by Jamis Buck is licensed under a Creative Commons Attribution-NonCommercial-NoDerivatives 4.0 International License.